Currently the weather in Churchill is Normal….for this time of year that is. With 50 mph winds and blizzard conditions pounding Churchill in the last couple of days, the rest of the season should be quite interesting with an Arctic feel to the region. Temperatures near 3F combining with the wind creates a chill more like -25F. Should the mercury hold steady in this range for another week or two, the Hudson Bay will start to catch up in sea ice volume. Every year just about this time things start to change dramatically.

This past week has been bountiful for travelers to the region seeking to take in true Arctic wildlife encounters and get a feel for the North. Guide Karen Walker and her group landed in Churchill and headed out to the tundra in the CWMA. Before even reaching the  rover launch site a sow with two coys (cubs of the year) were spotted near the road out by mile 5..not a bad start to the afternoon. Another mom and two coy greeted them on the trail to Halfway Point and the group spent a good part of the afternoon with them. Lunch at halfway point overlooking the Hudson Bay and bear sightings on the way back later made for a stellar start to the trip. 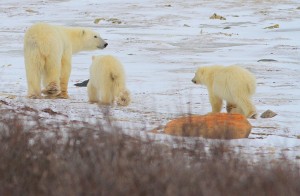 The following day the group headed out to Christmas Lake esker via the inland trails. Most of the other rovers were on the coastal road so Karen and her rover driver decided to take another approach to the area. Upon reaching the backside of some frozen ponds to the East of the esker, with hot coffee being served, another sow with two coys…third in two days, appeared in the distance. Walking away from the rover at first, they then turned back and tentatively approached before laying down near the road. As one of the cubs crept up closer to the rover, the entire group became still and quiet. Soon the other two bears rose up and came over to the rover as well sitting just off the front right window of the machine. Melting snow dripped from the rover onto to the nose of the smaller cub. For awhile time seemed to stop and then one cub moved around to the back grated observation deck and sniffed the shoes of the guests. This whole interaction went on for about two hours with almost half of that time up close and very personal. Karen stated that this was her personal “best sow and cubs encounter” in all of her guiding history. Pretty cool interactions. All in all, their 25 bear sightings throughout the day were very quality sightings. 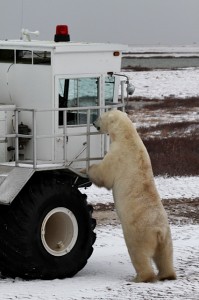 On their final day in Churchill, the group was able to explore Cape Merry for a long time as the air was dead still and the air temperature was quite comfortable up on the rocky rise. As the group hiked out to the old stone battery looking out toward Fort prince of Wales, the Parcs Canada guide removed his government issued coat ..too warm for the day. Spending over a half hour out in the open where normally windy and frigid conditions prevail, the group was able to see numerous wildlife tracks in the windswept snow cover. The gorgeous crystals of the unblemished snow sparkled in the soft sunlight.

Helicopter flights lifted off in beautiful light …heading East along the coast and then flying into some clouds and light snow squalls. Skies cleared out as the trips continued and a wounded caribou was spotted down along the tundra…maybe the next bear prey and subsequent meal. Several bull moose and bears dotted the landscape in the amazing orange light reflecting off the coastal ice forming in the shallows.

Guide Colby Brokvist and group were enjoying a day on the tundra this same day and seeing amazing tracks in the three inches of fresh snow that accumulated over the previous two days. Interpreting the tracks and seeing what animals were moving around and why to some extent was a fascinating lesson on this sunny morning in the North. The bear viewing was “phenomenal” as Colby put it A giant male just near Halfway Point dwarfed many of the other bruins in the area. As they made it to “point proper”, Colby focused a white gyrfalcon in the scope. Purple dappled markings revealed themselves as the bird filled the lens. A long the coastal trail, a mother with her yearling cub out on the Hudson Bay ice moved slowly while testing the surface..teaching the safety technique to her cub. About 16 bears with a couple of sets of sparring sub-adults occupied the lodge area. The mock fighting went on for a good 20 minutes before settling down. Out in the bay the ice between the open leads was a platform for seals and the Arctic sea smoke floated in the breathless air. 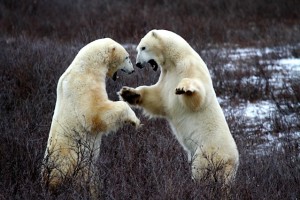 Guide Elise Lockton and travelers didn’t have much action out at Gordon Point so they headed along the coast and then in to the area between first Tower and Christmas Lake esker. A beautiful sow and her two yearlings came right up to the rover and played with parts under the machine. Very curious bears down East. Elise and her group also saw multiple Arctic fox in this quiet lightly traveled corner of the CWMA.

On their night rover trip, guide Sue Zajac and her guests spotted a vibrant red fox against the white covered tundra on their way out to the tundra lodge. Once there, numerous sleeping bears greeted them with indifferent stares. One sat up and another three were soon sniffing at each others muzzles but decided not to tangle…rest time. The group was just off the back deck and they  looked over at the visitors. The animal tracks held the shadows as the glowing sunset filled the chilled air.

That morning the group finished their breakfast at Gypsy’s deli and headed down to the bay to touch the frigid water behind the inukshuk in the Hudson Bay. As they looked around and took in the incredible scenery, a juvenile snowy owl flew over town and a raven perched in the steeple tower of the Anglican church…if they only knew.