Although the wildlife sightings, including good numbers of healthy looking polar bears, continue to impress travelers to Churchill, the weather has been less than Arctic -like for this time of year. Until recently that is. Suddenly that old familiar chilly wind from the North is blowing off the Hudson Bay, up the beach and right through Churchill. The open tundra in the CWMA also is feeling the cold as the thermakarsts are freezing up and a little bit of snow covers the land. Polar bears are starting to become more active as well with sparring males all around. This feels more like Churchill in November. 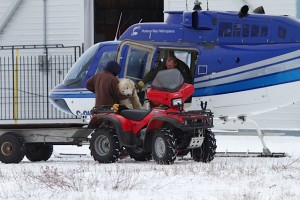 One of those polar bears was on his way out of the area in a net just two days ago. Six or more groups of travelers..some arriving in Churchill, some leaving…were fortunate to witness a bear -lift from the compound just adjacent to the airport. The big male was moved, in a tranquilized state, out on a cart from the compound to the loading area where Manitoba Conservation workers placed the cargo net around him. then Hudson Bay helicopters whisked the 600 pound animal away to the North shore for relocation. Camera shutters reluctantly clicked away in the wind -chilled air as the rotor blades kicked up a little snow dust from the ground. In the distance the line holding the net dangling from the helicopter blurs into some strange looking bird morphing into a black dot on the horizon. Imax cameras were on scene to film with two different angles set up…look for it in some future feature near you.

Other tell -tale signs of Winter rapidly approaching are revealing themselves in Churchill. Churchill River ice is starting to pile up on the banks and soon will be slowly choking off the rapid flow of water in and out of the tributary. With such a strong current upon tidal change here, it will take some severe cold to finish the job of freezing the near mile of water clear to the far side. 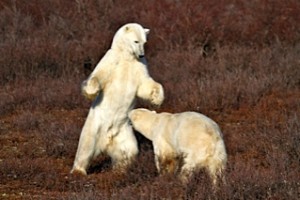 A couple of bears have also been in town the last day or so with Conservation officers from the polar bear alert program giving chase through the streets. A rumor that some sled dogs outside of town have been killed by bears still has not been confirmed. The overall feel of frozen tundra prevails with heavy waves crashing on the beach close to the stone inukshuk behind the town complex. A sow with her cubs was spotted out by the airport by guides Justin and Sue’s groups just as the burnt orange sunset melted away behind the West bank of the Churchill River.

Guide Paul brown and group headed out to the CWMA on their first night in town and were lucky to spot a white morph gyrfalcon just off the trail on the way out to the lodge area. After a relaxing night on the tundra amid sleeping bears, the group returned the next morning to the same area and encountered most likely some of those same bears in sparring mode just near the lodge.  The play fighting continued through the morning and the rover finally pulled out of the action -packed area heading toward halfway Point where a seal was basking on the rocks overlooking the bay. Some big male bears were seen in the willows near the point. On the coastal road heading to the East a “beautiful big scarred” male bear was sighted traveling over the snow -dusted land crossing over some frozen tundra ponds or thermakarsts as they are known in the North. Another gyrfalcon or perhaps the same one seen the prior evening floated on the cool wind crossing the landscape.A guest had dropped his hat on the way out to the tundra that morning and on the return trip he found it on the trail albeit torn to shreds by an angry bear..hopefully it was a NY cap. Grrrrrr!

Guide Brent Houston brought his World Wildlife Fund group to the lodge area with an idea to just stay for a short time on Wednesday. However, with incredible action around the area, the group spent a good part of the day there while bears roamed near and far. A huge male bear paced quite close to the machine while a couple of younger “bucks” came in from the willows behind the lodge. A female kept watch in the distance but kept away from the boys. Throughout the day the group saw eight or nine bears in close proximity with another five or so in the periphery. Many of the bears were tagged observed Brent. 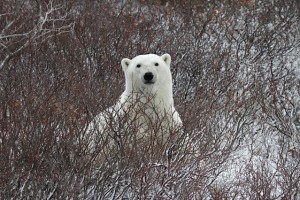 The bird life seems to be reduced to a few raptors towards the coast. A gyrfalcon early in the day along the trail and a snowy owl perched on top of  a small spruce in the soft low light were nice sightings though the songbirds and even ravens seem to have exited the region. Winter truly seems to be creeping in to the area.