Tundra Bare of Snow Though Not Bare Of Bears

As polar bear season moves into November, the Churchill Wildlife Management Area (CWMA) is still not so Arctic -like when it comes to snow cover. Wildlife viewing out on the land, however, has been very active as the animals wait for the cold and snow to inevitably arrive. Even with slightly warmer temperatures above freezing at times, polar bears have been displaying various active behavior styles. Snow is forecast most of next week with temperatures dipping into the -15C range. Bears should be on the move.

Natural Habitat guide Lynette and band of travelers started out their day this past week at Bird Cove but found it pretty inactive. The views across the cove back towards Churchill in the distance were beautiful and coastal precambrian shield rocks inspired all before the rover moved along the coast to Halfway Point. A resident gyrfalcon guided the machine along the trail dipping in and out of the updrafts gusting in from the Hudson Bay. While enjoying morning coffee and snacks the group spent almost two hours at Halfway Point watching a juvenile snowy owl through a spotting scope. Oh..and yes there were some polar bears. A younger male came from a good distance inland as guests watched intently with binoculars. At about the same time, another bear was spotted off the coast a bit swimming in the bay…just bobbing and playing. Constantly turning in the icy water as if trying to stay warm, he would periodically dive under and come up. At one point what appeared to be a floating log was discovered and he continued to play with the object for quite awhile. A pretty amazing site!

The “water” bear finally emerged from the bay and headed towards the rover and began investigating the look and smells of the vehicle. At times, while the group was enjoying hot soup and sandwiches for lunch, the big male bruin perched its’ paws almost on the top rail of the deck. Lynette’s travelers seemed quite content to spend most of the afternoon observing the bear up close. He took breaks to sit in the willows nearby and roll and roll about in the brush and slight snow cover built up along the fringe of the vegetation. As the group moved about the area toward the end of the day they counted eight or so polar bears within view ..all of them being fairly inactive. For some reason this bear was intrigued by their presence and gave them memories for a lifetime. The others were conserving energy in the relatively warm of the day.

Guide Karen Walker and her Natural Habitat group arrived in town from the airport, had a deli lunch at Gypsy’s and then followed a tip from their shuttle driver about a polar bear just outside of town by the old plane wreck dubbed “miss piggy”. As they followed the coastal road out of the back end of town, they came upon, not a single bear,but a mother and cub just 200 yards West of the plane. Quite a nice welcome to the high North country. I, personally, have always felt more in tune with the region when coming upon polar bears unexpectedly. This was surely a surprise to many of these first timers to Churchill. Another bear was spotted walking North just on the other side of the gravel pit between the road and the Hudson Bay.

The groups’ luck continued the following day as they were just 10 minutes from launch when a bear in the distance at about 100 yards caught their attention. Not even ten minutes from then, a  group of ptarmigan swaggered along the trail into and out of willows as the rover moved past. Good start to this day as well.

Karen and her driver conferred and decided to head straight out to the lodge in hopes of being the first rover to arrive on the site. They were indeed and found a couple of young sub-adults underneath the North end of the structure. They soon walked over and were up on the rover peering inside while sniffing the air. All were awed by the encounter. The two then settled down just about 15 feet off the back observation deck. Another bear emerged from the willows and began wrestling with one of the sub-adults just off the back of the rover. the pair moved all the around the area and both the guests on the rover and the tundra lodge were thrilled with the show. 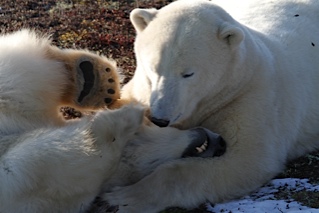 A short time later, Karen and group moved out a little toward Halfway Point when another polar bear walked out of the willows. The two bears continued sparring and this new bear would interact and wrestle with the two from time to time. As the action simmered down and the group sipped on coffee, the clock showed it was only 11 Am. Quite an amazing morning on the land. The action continued however as two more bears traveled in from the rocky spit that juts into the bay Northward. Another came out of the willows between the lodge and the bay. All in all, in a panoramic setting, there were seven polar bears in view at once. Some were sparring and wrestling throughout the late morning and early afternoon until things finally began to calm down around 2;00pm. About 15 sightings of bears on an amazing day. Another scene complimenting the afternoon was seeing fresh, clean bear paw prints on the ponds. Some of the tracks also had fox prints mixed in with them. The soft clear light made the prints stand out nicely from the glare of the ice.