Wildlife Abounds In The CWMA

These past few days have been stellar out on the tundra of the Churchill Wildlife Management Area (CWMA). Although the snow has not arrived yet, the wildlife sightings have been magnificent. Some of the sightings have actually been aided by the lack of snow…exposing the whiteness of the camouflage fitted for Winter. While this coming week may finally bring the inevitable storms from the North, travelers are quite happy with what they have been seeing. 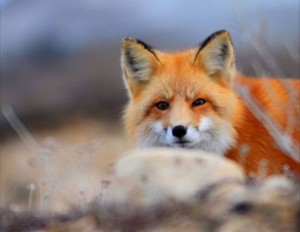 Natural Habitat guide Brad Josephs, who also guides brown bear trips in Alaska, had “the best day of the year” just two days ago. On their initial night in Churchill, the group headed out to the CWMA and were greeted almost immediately by a incredibly curious red fox. They received the same greeting from an Arctic fox the next morning as they ventured out for a full day on the tundra. Arriving at the tundra lodge that morning, the driver situated the rover in the front of the lodge. Soon the action began….two sets of sparring polar bears on either side of the vehicle battled through a heavy snow-shower into subsequent sunlight. Both conditions provided excellent atmosphere to capture the drama on film. Slaps and growls ignited in the chilly Arctic air as the mock fighting became intense and sustained throughout the morning. Brad commented that the sparring was “intense as I’ve ever seen.” And Brad has seen plenty throughout the years around bears. 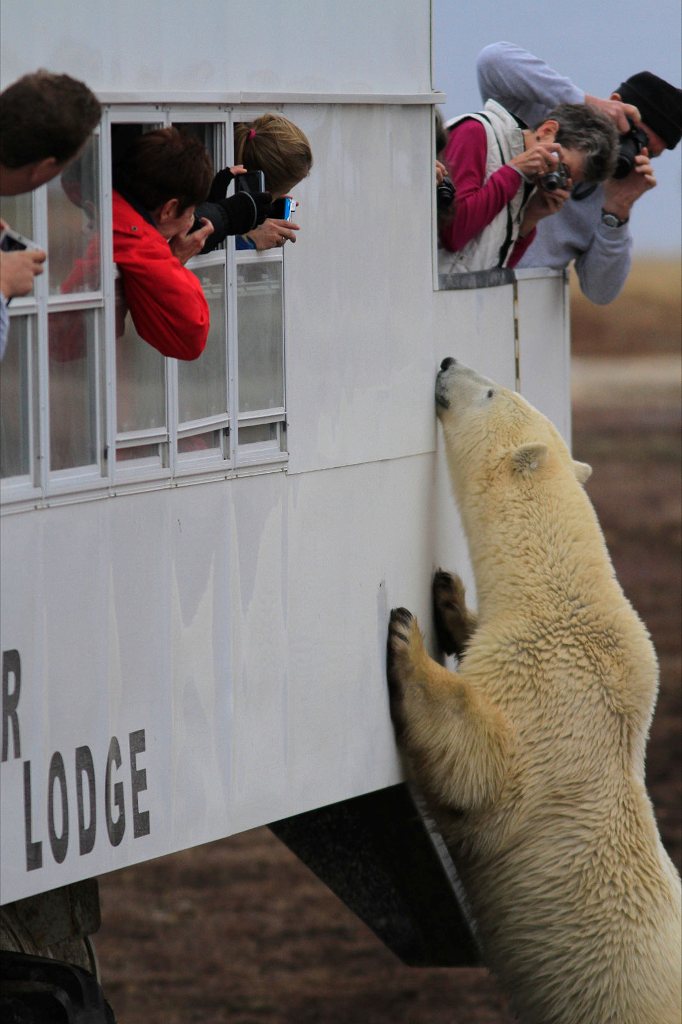 Birders in the group were quite pleased with sightings of both willow and rock ptarmigan, surf scoters and rare harlequin sightings. A dark -phase gyrfalcon also mesmerized the guests out on and above the stark landscape.

An estimated count of about 28 bears were spotted for the day including a nice surprise on the way back to launch when most travelers aboard the rover thought the day was complete. A sow with a two-year old cub seemed posed next to the trail as the rover rumbled home. A super send-off for the excited guests.

Guide Sandra Elvin also was enjoying exposing her group to the escalating bear numbers the past few days. on their night-rover trip the group had eight polar bears up close and personal around their machine. When just getting out to the magnificent tundra to enjoy the landscape is usually the main attraction, these bears surely made for an even more fulfilling journey.

The next morning also brought amazing encounters. An Arctic fox greeted the group in the pre -dawn glow just as moved away from the launch. Two sets of bears sparring out near the lodge kept them around there for a good part of the morning. This was definitely the highlight of about 21 polar bear sightings this incredible day. Though just like Brad’s group’s surprise, Sandra and guests spotted a sow and cub on the way back into town from their shuttle bus. Between the airport and the “Town of Churchill” sign, the two animals wandered methodically in the town’s direction…hopefully knowing enough to stay on the outskirts and not end up in the compound that evening. Of course if they have friends up North, it’s an easy way to go visit.

Their next excursion out to the tundra the following day brought 25 bear encounters or sightings. Nine of those polar bears were at the lodge displaying various modes of behavior. Two of those spent time sleeping on top of each other before rising up and sparring together for some time. Two gyrfalcons were also in the area….one between Gordon Point and the lodge flying in the up-drafts and another landing on the rocky shoreline of the spit extending north from the lodge. A few of the bears had quite notable behavioral characteristics. One was very skiddish and reluctant to approach any of the rovers. Another was quite big though quite skinny as well. We have been seeing a few bears of this nature this season..most likely linked to the shorter ice season. And finally a bear nicknamed “Muddy Butt” by the group, as his paws and rear were unusually covered.

Guide Colby Brokvist and group experienced an “awesome” day Friday on the land. At one point there were 3 pairs of sparring bears going at it simultaneously. The final one began with a bear lying just off the rover’s front nose. As another bear came out of the willows and roused him, they then both walked to the side of the machine- about 50 feet from us- and began sparring intensely. About 15 minutes of this brought heightened excitement amongst the travelers as they reeled off photo’s from digital cameras. The following day an arctic hare at bird cove nestled in the rocks as the group was still just adjusting to the morning light. Later  a white gyrfalcon flew right  by the windows of the machine as the group pulled off along Christmas Lake esker.  Almost immediately after spotting the white gyr,  a large gray morph flew by, this time only inches from the windows of the machine. What a rush! The folks were excited and Colby could hardly contain himself. An incredible Arctic fly-by!
The notable change these past few days has been the fact that many bears were out moving good distances on the tundra.  They were many in between the spits for the first time as well as bears moving between the coast and inland a bit. Not many polar bears have been spotted between the two lodges East a bit though farther East toward Cape Churchill, high numbers are being reported from helicopter charters.  As you can see numbers in general are escalating and should continue as the season goes on.