With the extended cold temperatures ranging in the -20’s and 30’s centigrade, solid sea ice has packed the Hudson Bay. The polar bear population in northern Manitoba is enjoying a cold Winter on ice with seals in their bellies. As usual the annual fears of late-season freeze-up were once again allayed around the third week of November when the Hudson Bay was solid enough for polar bears to venture off the land. A few bear sightings since then are most likely a result of Southerly winds that pushed ice out away from the coast while some bears came ashore and were temporarily landlocked. 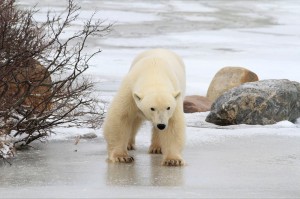 Overall, however, ice coverage in the bay is down again from recent years accumulation. This Environment Canada chart on historical ice accumulation in the Hudson Bay shows the overall ice decline in the past decade. While temperatures in Winter remain cold, the “bookend” seasons have compressed the high -ice Winter season into a smaller time-frame. Although extended time on land around Churchill is good for tourism via longer polar bear viewing seasons, less time on ice hunting seals means leaner bears and sometimes more irritated bears as discussed in my last blog post on problem bears in Churchill.

Currently the ice accumulation for this season is looking decent as seen detailed through this recent Environment Canada ice graph of the Hudson Bay. In this case, unlike ice in Eastern Canada where baby Harp seals are born, red ice as portrayed on the graph, is good ice. All the levels of ice thickness are at the high end of the spectrum and although median temperatures for Churchill are down by six degrees centigrade, surrounding communities along the Hudson Bay coastline have all measured normal, in range cold temperatures. 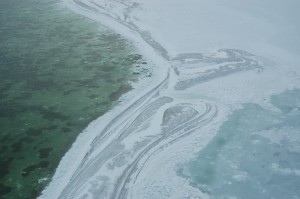 While ten or fifteen years of downward trend in ice coverage of the Hudson Bay may surely signal a warming trend in the making, we cannot assume this trend will continue without more evidence. As the polar ice cap shrinks as it surely is, more open water for longer time spans will allow for more heat absorption and thus further melting. How the polar bear population will be affected is still an unfolding story. This USGS study on polar bear population of the Southern Hudson Bay is a somewhat more in – depth review on how polar bears are being affected by the shortened sea-ice season. There seems to be a higher risk associated with new born cubs as well as adolescents rather than a direct correlation to adults with less body fat due to less time on the ice.

Quite clearly the past few polar bear seasons (October/November) in Churchill have pointed toward adaptive bear behavior as bears have been seen attending to more seal kills along the coast for supplemental nourishment. Even through my recent Summer guiding experiences in Churchill we have seen more Beluga whale kills in the shallow inlets or on the coast. Although no scientific data can point to these trends as real behavioral change, the change seems to be real. If bears can adapt and find new food resources, maybe the population wil adjust in the future. As of now the population seems to be holding steady with some Northern Inuit communities reporting an increase n polar bears. Whether these perceived increases are actually larger bear numbers or just more bear sightings due to more bear frequency due to ice conditions remains to be seen and documented.