This past polar bear season provided a plethora of snowy owl sightings across the tundra in the Churchill region. Daily guide accounts from Natural Habitat Adventure trips in October and November reported many more encounters with the iconic Arctic bird than the last few years. Now, that abundance is revealing itself in the United States as far south as Colorado. In Boulder county, where I live and Natural Habitat Adventures is based, only two documented sightings are on record. This year, numerous sightings have been called in. One snowy was even sighted at the Honolulu airport in Hawaii..the first on record ever in that state. What is happening?

Arctic animals flourish with one basic necessity…food, and of course availability of that particular staple. Polar bears rely predominantly on ringed seals out on the ice surface, arctic fox tend to forage on hares and lemmings and snowy owls also bag the occasional arctic hare, though ..a higher percentage of their diet comes from lemmings. This past Summer, Churchill had a explosion in the lemming population which carried over into the Fall bear season. And since it’s utterly difficult and surely frustrating for polar bears to sneak up on those tiny lemmings, the snowy owl population increased as well. This has not happened for about five years. The last time was quite noticeable in Churchill…I can remember driving along the launch road just outside of town limits and seeing a snowy on just about every other hydro pole. Amazing. 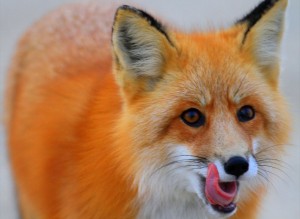 Predators like the red fox have been forced to expand their hunting grounds.-Brad Josephs photo.

There have been years when Arctic fox have dominated the hunting grounds also…seemingly pushing out the red fox and the snowy owls at once. Red foxes have been spotted far out on the Hudson Bay ice floes in recent years adverse to their natural hunting grounds. Expanding their diet via leftover seal -kills has been a necessity for survival. There seems to be a natural process of selection in which lemming predators take precedence from season to season. This year clearly favors the snowy owl however and now that population is migrating farther South than ever before in search of lemming-like food. This “irruption” as the overwhelming presence of a species is known, is allowing “southerners” to view the majestic owl without heading all the way to the Arctic. Montana, Colorado, Hawaii…even Boston Massachusetts, where 21 owls have been documented near Logan International Airport have all become new territory for the endangered snowy owl. I actually have seen a couple over the years on Cape Cod, MA in the marshes but the press rarely covers that rural location.

These areas all make sense. The openness of the prairies and grasslands out West and the marshes and  lakes of the coastal locations all tend to make the snowy owl feel right at home in a tundra -like  landscape. Getting there is another issue. With higher temperatures and long flying distances, the birds arrive to the new feeding grounds very stressed and depleted of energy. If you do happen upon a snowy be cautious not to harass the bird by getting too close. Use a spotting scope or good binoculars to check it off your life list.If you are in Colorado use this link, cfobirds.org, to keep up with the latest sightings and bird information. Other states have similar links that are easy to find with a little research. Good luck spotting one of the most beautiful birds in the air….and on the ground…hunting lemmings and possibly prairie dogs.