Edge Of Our World

I saw a post on Facebook the other day from a friend and colleague in Churchill who was extremely excited to be making a voyage out on Hudson Bay with a local dog musher to the edge of the floe ice. She spoke about not being able to sleep from excitement and then one more night until the trip. This would be her first venture out to the edge of the “frozen Earth”  as it extends seaward in its’ annual transient state. That “state” is constantly questioned these days to the point of ad nauseam by pundits who predict an ice- free Earth within the next 50 years or so. These “experts” never see the ice like many of the actual residents of towns that reside near this wondrous phenomena of our planet! The beauty of this world is lost in the data predicting its’ ensuing demise. We deserve to enjoy these wonders of our home without constantly looking over our shoulders. 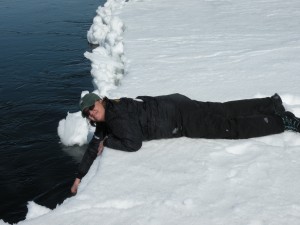 Rhonda on the edge.

Ok..back to the floe- ice…where am I going with all of this you might ask? I fondly remember the early years of Natural Habitat Adventures Seal Watch trips to the Magdalen Islands in the Gulf of St. Lawrence, Canada. The tour was the initial journey offered to hearty travelers taking helicopters trips out to the floe-ice to spend a few hours in tranquility with harp and hooded seals and facilitate the growing movement to protect them. I worked as a guide on land and on the ice itself enabling people of all ages to enjoy this amazing experience. When we touched down on the floes and patiently awaited the blades to come to rest, time seemed to come to a wondrous halt. Once the sound of the machine was reduced to that last spin of the blades overhead cutting through the cool air, we stepped onto the serene magical formations of sea ice. All thoughts and perceptions of the world were condensed into a zen-like wave of openness of both the mind and the landscape. The two became one….unbelievably without all the information…just nature!

In this age of information it’s funny…well not really…how with “all the facts”, we don’t always seem to have a better life. Yes, we are amazingly informed human beings synced to our portable smart phones and twitterized (first four letters of that method of communication quite apt in many cases) to each other so that one passing moment doesn’t go undocumented or passed around like a half -chewed caramel. We crave attention from peers and demand to know everything about everything. I think I would sometimes rather hear an interesting, provocative explanation to a question rather than the actual correct one spoken from an android who just pulled up the info from his..er..android. In fact, while we’re on the subject of facts, I’m sure I would.  In this exchange of information we have lost the ability to have tranquil, detached moments when our minds ease into thought like a young child does effortlessly from time to time.  A momentary cleansing of the proverbial slate so to “not” speak. I often catch myself before interrupting my 7 year old son Jack as he gazes off so contentedly into his imaginary world within our world. Not knowing his every thought soothes me.  One time, I pried  what he was thinking about out of him as his eyeballs morphed into warm, swirly marbles in their sockets…he reluctantly answered, ” an itouch dad”. That was the last time I did any prying. 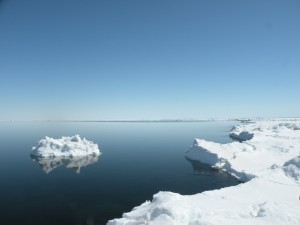 When I read my friends post…on yeah, yeah..I know Facebook…I was jolted back to that state many of us humans have seemingly lost. Her avid anticipation to journey 15 kilometers out on the Hudson Bay ice to its’ edge where upon reaching it, she would find only water….unfrozen ice…caught me…stopped me…made me gaze off into space and think back to simpler times when such a trip seemed wildly normal. That quest for the end of the earth where we find…..nothing..nothing but water..melted ice. A place where we don’t need to google water or ice….we know the difference instinctively…at least I’m pretty sure. The only information we need is kept silently within our minds enriching ourselves and our race at once.