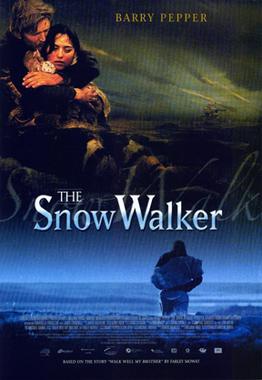 In the Summer of 2003 I was guiding beluga whale and Arctic tundra trips for Natural Habitat Adventures in Churchill. This would be my sixth season showing avid travelers the amazing ecosystem and its’ adapted dynamics of the north. Churchill’s Summer is sublime and completely different than the Fall polar bear season in that the town blends in with the landscape and the mind is allowed to release any stressful anxieties just walking along the quiet streets. The hustle and bustle of polar bear season and the temperature issue can distract from that freedom somewhat. This Summer was different and the change was quite evident upon my arrival.

Seventy five people would go mostly unnoticed in most towns and surely polar bear season in Churchill would swallow them up in an instant, but Summer here is different…newcomers have less camouflage. A film crew of 75 from the Snow Walker production invaded the town that Summer and a buzz, aside from the constant drone from mesquitos, took over. If only for a few months, Churchill had gone Hollywood! While the contrast of personalities was glaring…..though pretty exciting….the town took in these people like they were locals. Some actual locals became part of the film with parts in the picture. Others helped build the sets and assisted any way they could. One family had their entire house redone to be used in the film. When a movie is made in many small towns elsewhere, it usually “puts the town on the map”. Churchill, as we all know, is already on the map…and most of the 900 or so residents are content with the amount of notoriety it receives now. Isn’t that the point of living in such a remote place

In those days Natural Habitat trips were spaced out…no not the travelers..well ok some…but what I mean is there were often up to a week between some scheduled trips usually due to the train schedule and availability. So that Summer I was able to observe the action at close range between meeting and guiding groups. I was asked to be an extra in the film but could not commit to a three week shooting period. And, as much as my travelers would have been impressed to know I was a movie star, I think their dreams of seeing the Arctic and most importantly a couple thousand beluga whales that migrate to the Southern Hudson Bay in Summer were a little more pressing. Still, the thought of getting my start in the film business was quite tempting…but I had a job to do. Oh well..there still is Ocean’s 13..or 14..whatever.

Another exciting experience during that Summer was a reconnaisance helicopter flight along the Knife river to the Northwest. Information had been obtained by one of the producers that a Cessna aircraft had gone down along the river many years ago and had never been salvaged. The production staff needed an old, small aircraft to use for the main crash site in the movie. I just happened to be at the right place, Hudson Bay Helicopters, when pilot Jody, local guide Dennis Compayre, who now writes a blog on Churchill and bears in Onemanspolarbear.com and one of the producers were about to take off on the excursion. I asked if they wouldn’t mind an additional passenger and they said, “another set of eyes would be great”. We stopped first out along the coast at Seal River Lodge to speak with one of the Webers and hopefully get some more information on the exact location of the downed aircraft. The main contact was out on the land so Jody spoke with him via crackling radio, got some sketchy coordinates and we headed off again to search. When we reached the North fork of the Knife we quickly realized the task at hand wasn’t going to be easy as it seemed back in town. Overgrown willows slurping up river water had formed a web so thick and high it would be very difficult to see through it. We slowly moved along the river about 100 ft off the ground, both sides, back and forth for nearly two hours but came up empty. I can remember the adrenaline flowing through my body as hopes of finding the aircraft were thrilling. We were going to strap what we could to an attached chord and bring them back to town similar to the method that polar bears are flown north. I so wanted the trip to be successful so that the adventure would continue….no luck. In the end the film crew used some old pieces from another plane. They just made a wreck from a wreck..nice work.

The town was hopping that Summer…the bars at night were filled with film people telling their stories of movies and adventure in far off lands. In the day people with watches would roam the town trying to locate things in stores…usually very cheaply…or find people they needed to speak with about the set, schedule or next film they were planning. All the time I had to remember that these days were making my stories of adventure I would look back on someday. To have the experience of working in the Arctic environment and being part of the community of Churchill and out on the water of the Hudson Bay and Churchill River almost daily with the majestic belugas and various sea-birds was incredible. To constantly be learning and teaching new links between ecosystems and how they survive that environment was invigorating. Even now, as Summer approaches, I long to be part of that web of life again….the simplicity and vastness of the land that the movie Snow Walker attempted to capture. Take a look at the film and enjoy.