Polar bears, rain, fog and snow on the way

Sometimes Churchill can seem a million miles away. Weather in Winnipeg and Churchill this time of year …any time of the year for that matter….can be an adventure in its’ own right. Unpredictable at the very least. For Natural Habitat Adventures guide Karen Walker and group it surely felt like that as they were delayed leaving Winnipeg for a few hours before finally arriving in Churchill.
After arriving  in the polar bear capital, the group had a relaxing meal and then witnessed the amazing drum dance with Peter and Mary …a unique Inuit cultural experience in an intimate setting inside a upik..or tee-pee structure. A perfect way to ease into “tundra time” as we call the slow, relaxing pace of the north. 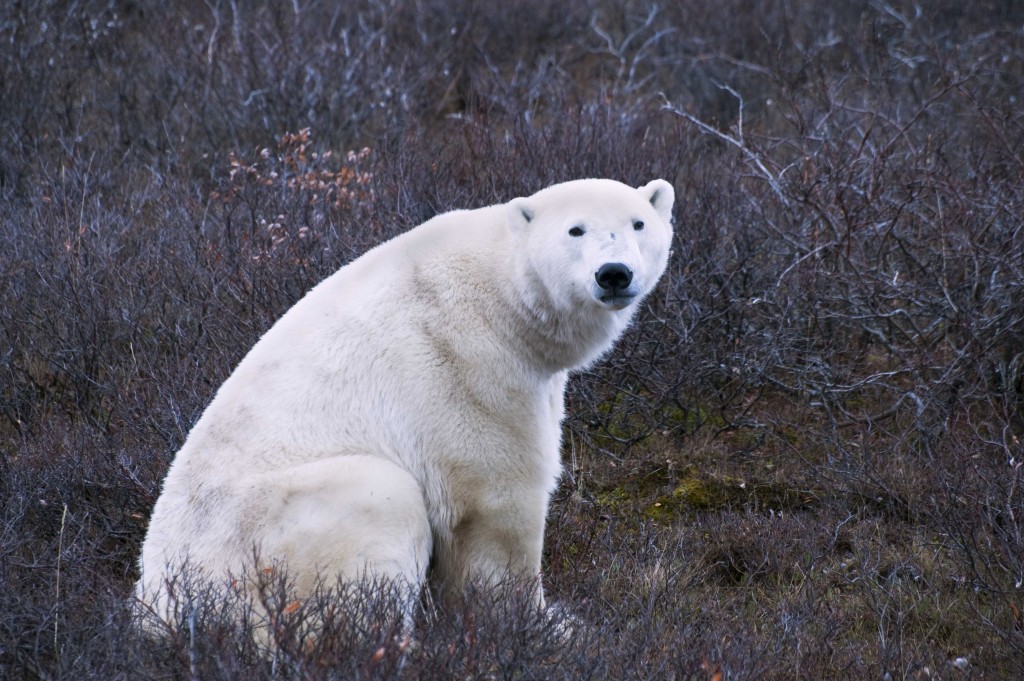 On their first day out on the land a distant snowy owl greeted the group out at Gordon Point aboard their polar rover. Travelers got last glimpses of reddish tinted seaweed and golden tundra along the coast before becoming buried for the winter and morphed with the rest of the landscape into whites and grays. Later, along willow and spruce sheltered Ptarmigan Alley, a large male rested and stretched periodically. Lifting his head to size up the rover and guests gave everyone a nice taste of the polar bear’s life…nice way to start the trip. Another bear at the lodge walked out north towards the point while three others lounged around near the lodge. Every so often they would roll, stretch and become a little playful. very cool. 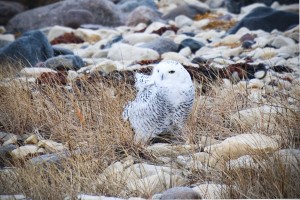 The following day another darker, juvenile snowy owl greeted the group as well. Seems to be quite a few “snowy’s” around this year..maybe this is their cycle year…such majestic animals. A half dozen bruins…a hockey team…were spread out around the area near the lodge. Mostly resting and stretching until some sparring started up…gloves off.  The display started under the lodge then moved to the front where all travelers had great views. Ptarmigan scurried…or waddled..off into the willows bringing smiles to all.

A final day  trip to the Eskimo museum gave all an excellent background on the intermingled cultures of local tribes as well as Thule, Dorset and Pre-Dorset history. All of these peoples played major roles in forming the feel and infrastructure of this incredible region. Some are ghosts..some are still with us…continuing to form the Arctic.

A polar bear leans against a rover.

A trip up to Cape Merry gave people a chance to observe the tundra up close and search the water of the Churchill River for beluga whales that some folks had spotted within the past week. It’s a bit late and I have not heard of whales staying south this long for a good while now. Most years belugas head north to the Hudson Straits area in the northeast by mid-September in order to beat any ice formation in the Hudson Bay. If the whales can’t make it back to the open -water polynas of the straits they will perish by being trapped under the ice. the Straits have open water due to currents that do not allow ice formation. Whales use these polynas to breath in the winter. As the group was leaving the cape, a beautiful, glimmering silver fox came right up to the bus….looking right into everyone’s eyes. He then hopped up on the boardwalk and greeted another group at very close range.
The polar bear holding facility has a live -set  trap  right by the informational panels. Kind of a strange spot for such a thing. No travelers have been captured yet. It’s only a matter of time I’m sure…probably a photographer.

A final night out on the tundra produced inquisitive polar bears at the lodge. Three different groups were graced with bears coming right up to the machines and sniffing under the grated back deck or leaning up on the side of the rover. Natural Habitat guides Colby and Sue both had bears greeting their guests and then a big male came to Karens’ rover and sat next to the group for a good 15 minutes and then walked under the deck ….never standing to sniff boots but still thrilling for all the guests to have the animal separated by only a half inch of steel. As the wine and cheese was broken out and darkness set in, one polar bear did stand up and leaned against the window giving some guests another amazing thrill of a lifetime. Sparring and bears coming and going in the shadows made for a most memorable experience for all.

Guide Colby Brokvist has had some great bear activity on the land for his group of travelers to marvel over. Most recently as they ventured out in their rover, they made their way to Christmas Lake Esker where unfortunately not much was happening in the wildlife realm. Fortunes turned however as other guides radioed over to Colby’s driver that aa sow with two yearling cubs were way out toward second tower. They made swift pace over to the area and were rewarded with the sightings and then the cubs sparring playfully at perfect distance for photo’s and general viewing all while eating a nice lunch. An immature snowy owl out by the old Inuit stone kayak racks and five or so black bellied plovers splashed around in the tidal flats on the coast. Seeing all the Arctic wildlife together enhances the experience..you can get a better sense of the survival urgency when observing multiple life forms moving around in this environment at the same time.

18 bears have been reported as threats during that past week.

A total of 95 bears have been reported to date this year.

No bears have been officially flown out though polarbearalley.com has reported that Animal Planet may have arranged and paid for an evacuation flight.