The polar bear season has transitioned from Fall to Winter in a little less than a week and now the snow keeps coming. Today, sideways blowing snow and a harsh north wind has put the routine mid – season scare of an early Hudson Bay freeze -up into everyone’s head. This really does happen every year when the first sign of grease ice – slowly undulating surface ice that flows around like grease or oil on top of the water- appears along the coast. Yes it’s around -30 with the wind-chill factor and no relief predicted in the near future …but, all it takes is a good south wind and that ice will be pushed out and gobbled up by the bay. The Churchill River has already developed some pans a little south of the “flats’ area…mostly because of the higher percentage of fresh water flowing out. The upside to freezing of course is the increase in polar bear numbers as well as activity along the coast.
This report by a Natural Habitat guide gives an indication as to how the wildlife activity has escalated rather quickly and dramatically:
“Woke to a blustery, snowy morning just had that feeling that it was going to be a GREAT day! Headed east to Gordon Point and initially saw bear lurking in the willows after first tower. We could see two bears along the coast skating on freshly frozen ponds and investing ice forming along the shores of the bay.. Sooner than later we had two males sparring in front of us, slipping as they played on a frozen pond. We stayed there for quite a while. For lunch we decided to explore the coast road between Gordon Point and out east….creeping along the coast we found a bear right off the road digging in the seaweed. We decided to stay put, shut down and have lunch… That bear got curious…and totally gave us the show we all dream of…investigating under the back deck -grate, standing and leaning up against the vehicle, etc… All told we saw 13 bears!Total blizzard conditions in town tonight. Let’s hope the wind dies down…for another epic day…”

Polar bear track in the fresh snow. Brad Josephs photo.
Natural Habitat  guide Karen Walker had her group out at Cape Merry bustling with action and cold in the biting wind. Driver/guide Koral told some stories of the Hudson Bay Co. and the Jens Munk expedition. After getting up enough nerve to trek up to the Cape Merry battery, the group headed out into the biting wind. What an exhilarating rush to stand up on the cape Merry bluff in the frigid cold and gaze out over the Hudson Bay and see Fort Prince of Wales across the Churchill River. On the winding road back a stop off at the Anglican Church at the edge of town for some history on the Franklin Expedition and a chance to see some amazing stained glass windows in the church itself and the most famous of them all,,the Lady Franklin Window. The soft light of daytime is a perfect time to view them.

That night, in a storm on an evening rover trip, night rover, everyone’s expectations for polar bear sightings were low. However, luckily a bear at the end of the lodge.The driver was able to able to pull right up next to him. His head was resting on his front paw and his short legs extended out back behind him, laying on his belly.Later he came right up to the vehicle for a visit. Quite a solitary experience.

The next day,the travelers headed out toward Gordon Point and happened upon a couple of young adult males sparring.They put on quite a show for several rovers in the area. Amazing how they can just ignore these massive vehicles and go about their business.Later, traveling down Ptarmigan Alley, the group spotted a few other polar bears walking across the frozen ponds or thermakarsts. Bears can move freely now across the tundra with no open water in their way to divert them. Photographing them moving across these surfaces is optimal.

One of the highlights of the trip came the following day, departure day, exploring along Goose Creek Road. “As we crossed Goose Creek, a guest saw something dark below the bridge,running up the frozen creek. It turned out to be a wolverine! (This was my first wolverine sighting ever!!!).” stated Karen. Further upstream, some other animals were moving around.They turned out to be a cross fox and three river otters! “It was interesting watching all three species of critters encountering each other, but no attack occurred.” she added. ” While this was happening on our left, a beautiful red fox appeared downstream on our right.This fox was much closer, so the guests’ attention was drawn to him. He later made an appearance for us while we were at the marina observation tower.” reported Karen  The partially frozen creek with the frost on the trees & the new snow made it into a winter wonderland out there. Wow, what a morning!!! 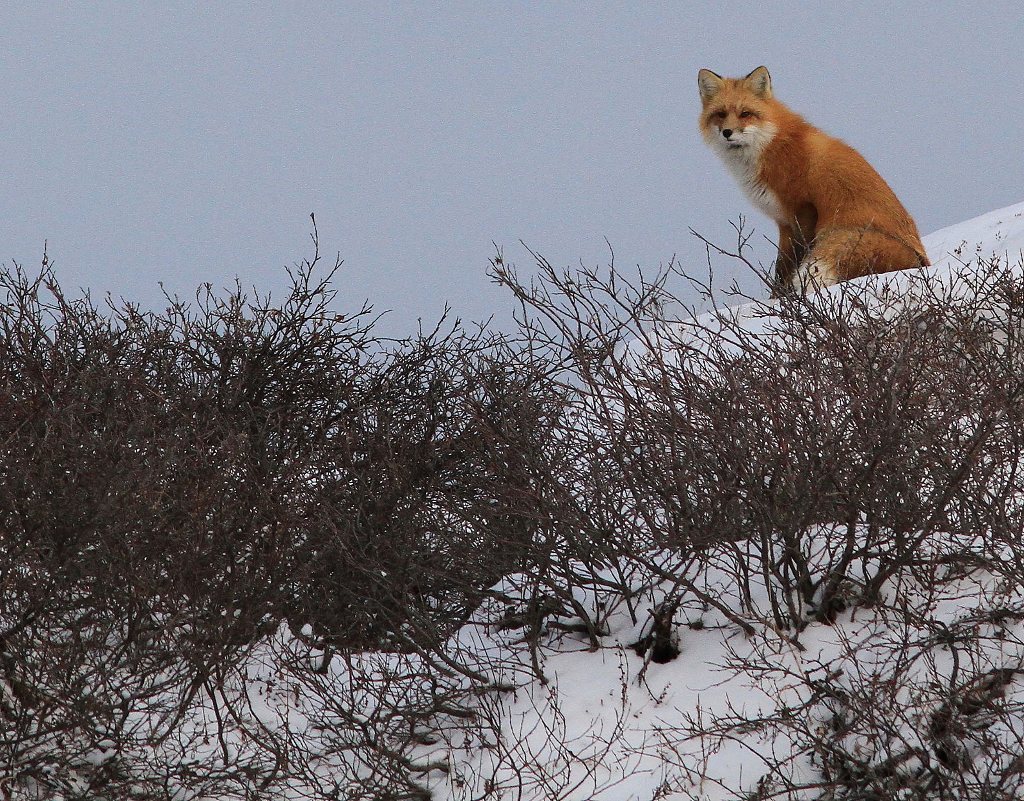 Four guests also went flightseeing on a helicopter and saw a moose as well as some bears along the coast. Some other travelers went dog sledding   with Kelly and Churchill River Mushing and had an amazing time. Back in the warming tent hot cocoa and trail stories warmed the blood. What a trip!

This dramatic weather change proved timely for Natural Habitat photo group and their guide Colby Brokvist.  upon arrival the group took some dramatic pics of the stone inukshuk by the Hudson Bay. In addition to the fantastic red light reflecting off the cloud filled sky, the group set up some spotlights for a dramatic affect.

The following day on the tundra, a playful young female polar bear greeted the rover right off. later near Gordon Point revealed some bears up-close and some light sparring activity. The rocky frozen coastline with chunks of tidal ice combined with amazing sunlight made for varied, interesting shots. On the way back to launch,a sow with two cubs set against a background of soft glowing sun and silhouetted stunted spruce trees made for epic photos. 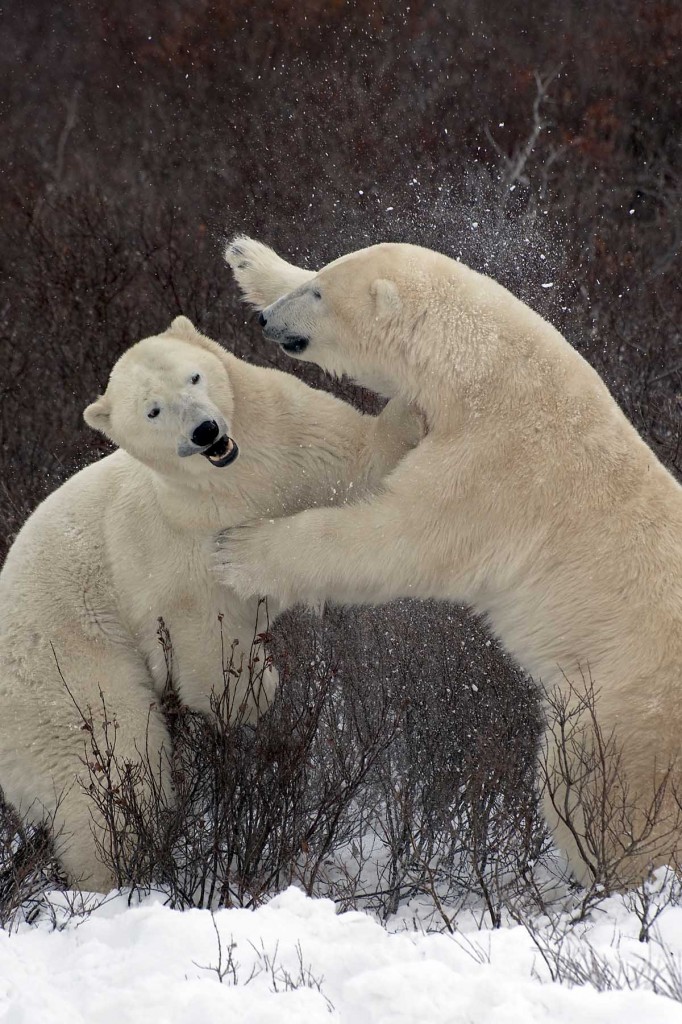 The final two days on the land were highlighted by sparring bears at the tundra lodge and close looks at a snowy owl just near a little esker. Then a bear on the rocks just past the airport. Back out at the lodge three sets of sparring bears kept shutters clicking incessantly . One set, later morning, was only 20 yards off the rover’s side and close in action shots were captured. The ride back provided more chances for snowy owl shots.

In other news, for the second consecutive year, conservation officers and RCMP raided Brian Ladoon’s dog compound at mile 5 and removed six bears lurking around for “dog” rations. His mafiaesque photo nad tour business seems to be doomed at this point.