Well, the changes in the weather in Churchill have truly made polar bear season feel more real…or at least what most people envision when thinking of polar bears and the north. It’s pretty much like clockwork…when Halloween comes, so does the cold and snow. Spending 12 seasons in Churchill gives one a sort of internal feel for the weather and its’ nuances. Most of October is fairly calm with temperatures consistently around freezing and as the month turns anything goes ..and it usually does.

This past week Karen and her Natural Habitat group arrived in Churchill to find beautiful blue sky. It was cold with a calm wind and a light layer of new snow crystals on the ground that shimmered in the sunshine appearing like diamonds across the land. 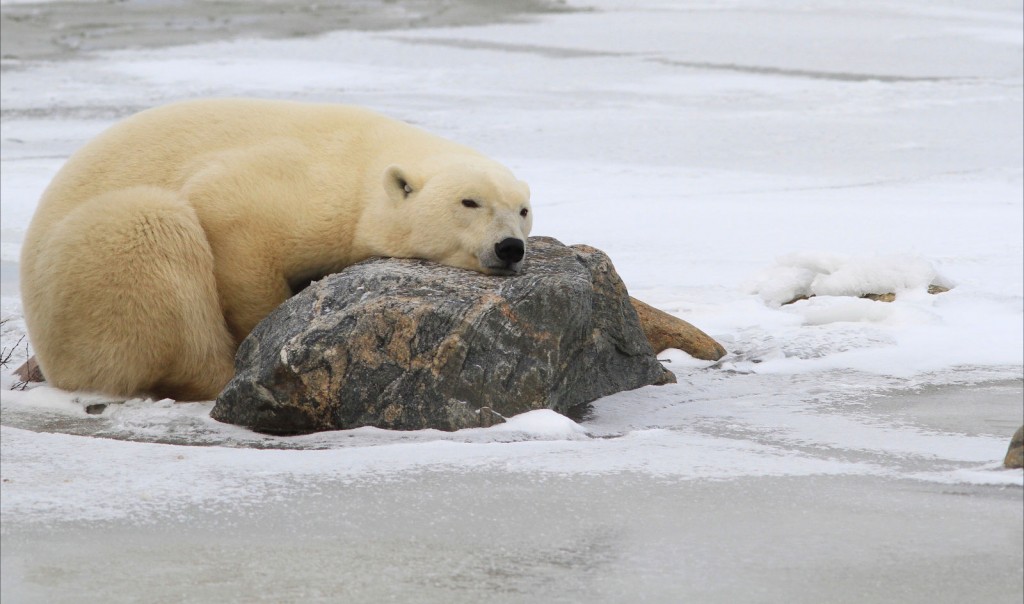 Sleeping bear on the tundra in the CWMA. Brad Josephs photo.

Before even reaching town excitement flooded the bus with some news from another guide. “We heard about some “pizzas” (code words for polar bears used over radio communication between staff) near Miss Piggy, so we took the Coast Road on our way into town. It turned out to be a sow and her two one and a half year- old cubs laying in the Canadian Shield rocky formation.”, reported Karen. They lifted their heads up and gave glances toward the thrilled travelers.. What start to the trip to the north.

A view across the calm Hudson Bay from the stone inukshuk behind the complex allowed the group to get their bearings before an orientation by Karen on polar bear biology and the Churchill area. 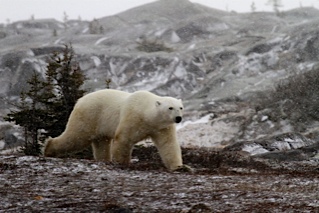 A polar bear walks along the rocks in Churchill.

The following day it was off to the Churchill Wildlife Management Area to take in the landscape and hopefully some wildlife activity including some polar bears. Within just fifteen minutes from launch a bear was spotted sleeping near the willows. As the rover moved closer the bear raised its’ nose to sniff the scent  several times. Three brilliant white ptarmigan  were running along the tundra in the same area and the Arctic was revealing itself to the new guests.

Out at Gordon Point the group was enjoying  morning coffee  and tea and a rock near the coast turned into a sleeping bear…caffeine will do that every time! Since the edge of the bay is beginning to freeze, bears will rest close to the forming ice almost as if they are willing the water to freeze faster. This particular animal rolled around on the ice and snow seemingly quite content to see at least some progress.

Continuing along the rugged coast with red and gold seaweed strewn between ice covered rocks, a couple of bears were foraging the kelp beds….possibly hoping to find some morsels of some kind washed ashore in last week’s storm. “Their noses were all brown from rummaging in the seaweed. One of them came over to visit us under the back deck.” Travelers took turns having their feet inches from a polar bears nose. Just one of the things to do out on the tundra.  After lunch, not far from that location, another bear came over for a visit and also sniffed some boots from under the back observation platform. Some great encounters that will be remembered always.
That night in town the group was treated to a special concert by the Fiddlestix band. A teacher in the school, Joanne Stover, started teaching herself and some kids how to play the fiddle six years ago. They travel to a couple of jamborees throughout the year to learn more about fiddling. The concert was held by the large wooden polar bear slide inside the town complex. Four kids (ages 14-17) performed, along with Joanne, and they were accompanied by a guitar player. “They played fun jigs and reels, so it was entertaining to listen to. It was also great to meet the kids & learn more about the music program in a remote community.” stated Karen.  Many of the guests also went down the polar bear slide, then toured the complex to see the hockey rink, swimming pool, playground and library.A nice exposure to the activity center for this remote, frontier town on the Hudson Bay.