The past week in Churchill has seen dropping temperatures..currently just 12degrees F…and snow accumulations across the tundra. The gray of the clouds and white blanket of snow across the tundra covered the reds and yellows of the land..buried until Spring.

Guide Karen Walker and her travelers were out again on the land in the CWMA when they came upon an Explore.org rover with crew filming video. As Karen’s group arrived, Explore.org departed and the polar bear they had been filming became curious and approached the rover. A sub-adult female with a “beautiful face”, according to Karen, she moved to a position right under the back deck. The bear spent quite a bit of time under the deck sniffing many boots and laid down next to the rover as lunch was served….to the people that is..not the bear.

In the meantime, a very dark, nearly black cross fox made a brief appearance gliding through the blowing mist of snow….then vanished. The young, female polar bear moved off and another bear popped out of the willows. Perhaps attracted by the delicious -smelling soup, he had his nose up in the air searching for the scent -trail. finally he bee-lined right to their rover. Standing against the rover and peered in at the soup-slurping humans…what an amazing experience…probably for the bear too…would’ve been better if he got some soup I suppose. As the rover motored back toward launch, a glowing -red fox appeared nearby.

A red fox in the grasses stands out in the first snow of the season. Brad Josephs photo

Karen and travelers were guided on tour around Churchill Friday.  Rhonda, local tour guide and  Churchill Summer guide gave a complete overview of Churchill’s history and  culture peppered with ample funny stories.  It was a very blustery day, with roughly 50km winds. “My gung-ho group all bundled up and went for a view at Cape Merry.  The Parks Canada rangers, Duane & Dave, were amazed that the whole group went out in that Arctic weather. ” mused Karen.  The freezing rain was freezing on jackets and the bus windows, so we had to constantly scrape them off.  The waves were crashing along the shore of Hudson Bay. All these effects gave a good sense of northern living. …quite harsh.

“We toured the port & the Town Complex.  A high school volleyball tournament was going on with the kids from down the rail line, so it was busy around the complex & restaurants.  We visited the Polar Bear Holding Facility on our way out of town for our night rover. ” added Karen.

On Saturday, some guests went on a helicopter journey over the tundra in the CWMA and Wapusk National Parc and had excellent  moose and several polar bear sightings. The overview of the land is simply incredible with scattered thermakarsts and patterned   ground. I highly recommend a tour through Hudson Bay Helicopters to round out a complete perception of the geography. Seeing wildlife from that vantage point also will be a lasting memory.

Later in the morning the group went out to the marina and observation tower for a beautiful view of the river.  Winter has set in, and  freezing rain had an adverse effect on the electrical lines, forcing the town’s power out for a few minutes at 1pm, so the group had to hurry to an earlier lunch, in order to get their orders in while the Seaport’s kitchen still had lights. One of the small foibles that gives the remote town of Churchill its’ character.

At the outset of the Arctic adventure for Natural Habitat guide Sandra Elvin and her group, wildlife activity was somewhat sparse though great for those moments when the animals appeared. “Our first rover day had three snowy owl sightings, two gyrfalcons, a silver phase red fox, a red fox, ptarmigans and plovers, and six polar bears”, reported Sandra….oh..and an Arctic partridge in a pear tree. Not too sparse really.

Two sparring males stay tuned -up for the ensuing seal hunting season. Brad Josephs photo.
Two sets of the bears were sparring, and the group observed one bear roam in from a far distance. That particular bear came in from a spit of land out in the Hudson Bay considered a polar bear resting area to join in the action. 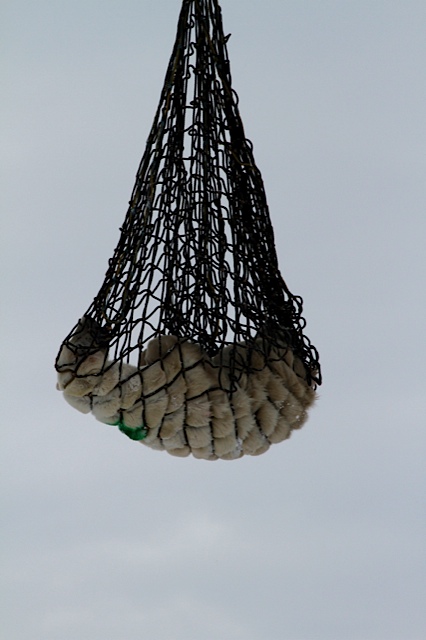 A polar bear is lifted via helicopter from the holding facility.

On their second day on the rover in the CWMA,  a red fox crossed their path on the way to the launch, and later two more foxes revealed their rusty coats throughout the day. “We were lucky to see two different sets of sparring bears -four bears total-, and two gyrfalcons chasing a smaller bird, catching it and devouring it in no time at all.” reported Sandra. This was truly an amazing, rare sighting!
Action continued on an evening night rover tour as a large male polar bear nearby the lodge. Earlier in the evening a sow with two cubs came into view from a distance. Since there have not been a plethora of these sightings this season, this group was very excited to see the family unit.
Excitement gripped Churchill on the group’s final morning as a polar bear was on the north of town near the Brian Ladoon’s stone “castle” hotel. Sandra and travelers were first to come upon the animal and called in to Polar Bear Alert. The group followed the conservation officers and watched their “cowboy” attempt to control the bear. As the group headed out of town for their journey home they were just in time arriving at the polar bear holding compound to see two bears being flown northwest  just before our catching a flight back to Winnipeg. All in a days work ..tracking polar bears in Churchill!