The last days of polar bear season are going out on a high note and a cold note as well. Temperatures are in the mid -negative teens and blowing snow is sweeping across the tundra and through the town of Churchill. It’s so cold even the polar bears are heading out of town. ..well actually the cold suits them just fine. Cold means food to the bears…as in seals….ringed seals by and large. The larger the better!

Natural Habitat guide Lynnette and her group were out on the tundra and had some amazing late-season experiences. Out east, in the heart of the Churchill Wildlife Management Area (CWMA), a dozen bears showed themselves to the intrepid travelers… according to Lynnette the experience was “awesome considering we weren’t sure if there would be any bears at all due to the early build-up of ice…which does stretch out into the bay as far as one can see.”

The first three or four bears were spotted a couple of hundred meters out on the Hudson Bay ice …not far from the trail. This is something only a few select groups visiting the area in the late-season will experience. To sense that vital connection between bear and ice adds an extra dimension to the trip. One polar bear appeared to be hunting..sitting still looking down on the ice placidly. Another bear seemed to be patiently stalking something under or within the snow-covered ice…frozen in a half -step for over five minutes…like a cat preying on a bird or unsuspecting mouse. Meanwhile, a female bear ambled along the shore in the foreground and then bedded down in some willows..seemingly indifferent to the presence of the rover. Just watching a sleeping bear amid the Arctic landscape can be soothing to the soul.

Traveling further east, the rover came to rest on the solid, icy surface of a frozen thermokarst with sheets of blowing snow wafting across the surface. Quite quickly a very thin bear approached the machine. Appearing older and less healthy than most of the other bears in the CWMA, upon closer scrutiny a scarred face and broken and missing upper canines as well as a quite sunken mouth confirmed the initial observation. As he approached cautiously, another polar bear came sauntering across the ice causing the thin bear to hightail it away to safety. This new bear appeared extremely fit and evoked an air of aggression the older bear wanted no part of.  “This bear had a large scar over his right eye…’scarface’ was what the group aptly coined him.” reported Lynnette. ‘Scarface” spent a long time with the group..constantly jumping upon the side of the machine…then moving to the rear of the vehicle and under the back, grated deck to sniff thrilled guests boots. His attempt to remove the taillight was thwarted by rover driver Ward. More than a half hour of aggression waned finally and the bear moved off away from the rover. An amazing day was capped off with a red fox heading off into the red-hued sunset …seemingly melding with the ball of fire glowing over the grey and white arctic landscape. 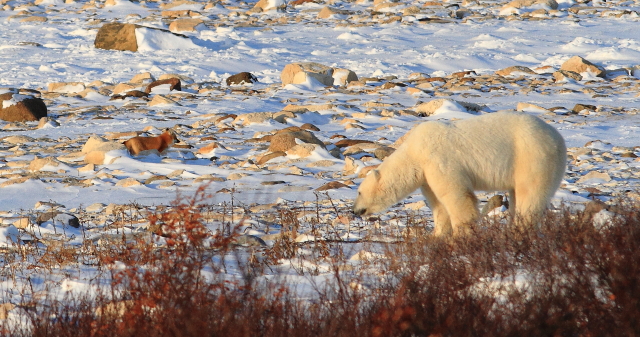 The following day was a bit slower though it began with gorgeous sunrise appearing as the group headed out of town toward launch. Out at Gordon Point a sleepy bear occasionally walked about and also stretched and buried his head in the snow while raising his hind quarters in the air. Maybe this was the same bear guide Sandra and her group spotted a week ago out in the CWMA. 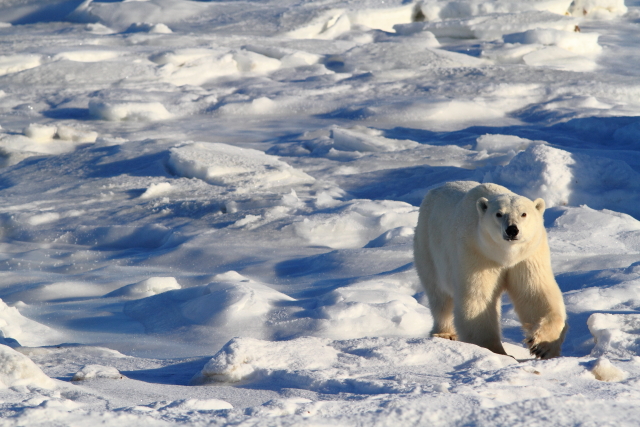 A polar bear ambles through the snow and ice. Brad Josephs photo.

Heading further east the group came upon a male lounging and attempting seemingly painful yoga positions prior to a female approaching from the ice edge. The female approached the bear though decided against coming too close. As she moved away, she gave a wide berth to the large male but he decided to follow. He stalked her step for step and then lost interest as she neared the pair of rovers in the area. A beautiful female of four or five years, she moved to the rear of Lynnett’s rover and sniffed at excited guests feet for 15 minutes before heading off.