Don’t Judge A Cloud By Its Cover-Polar Stratospheric Clouds

Churchill and the Arctic have many splendid nights of  spectacular aurora borealis..especially at this time of year. “Northern lights” are an amazing experience for anyone lucky enough to make it far enough north to take it in. Further north and closer to the  Arctic Circle, the sky has been displaying other fantastic colors since December – but these are different then the aurora borealis.

A rare appearance of polar stratospheric clouds has presented itself on Earth’s  northern polar region. These clouds, commonly associated with the formation of ozone  holes, form much higher (25 km)in our stratosphere than other more ordinary clouds (5-10 km) and produce incredible colors around the time of sunset. 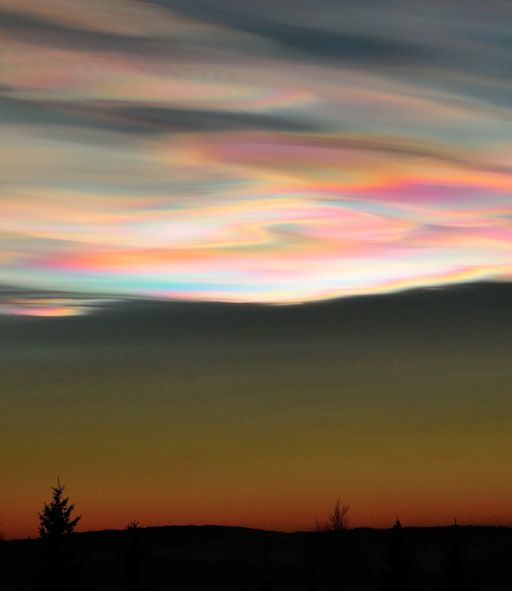 “Right after sunset on Dec. 22nd, the clouds were so bright they were uncomfortable to look at directly,” says Marthinusen.

Forming when temperatures reach minus 85 C in the lower stratosphere, these icy jewels of the sky are also known as “nacreous” or “mother of pearl” clouds.  Sunlight glimmering through the minute ice particles cause the soft, though iridescent colors by means of diffraction. Unfortunately these breathtaking polar stratospheric clouds have a dark lining. They are known now to be associated with ozone destruction.

However, on the positive side, these clouds can be viewed as a accentuated reminder to carefully watch how we can conserve different energy sources on our planet.