Why Lichens are so Likeable

Biologically stated lichens are two species living together as a single organism. This organism survives because of the symbiotic relationship between the alga and the fungus. These two species working together might just be the optimal combination of survival in the history of living organisms!

Here’s how the two species work together. The usually larger species-the fungus-utilizes the alga for food produced through photosynthesis. Tall filaments around the perimeter of these lichens act as protection for alga from environmental strains as well as work to trap nutrients and moisture thus increasing life span for the alga. This symbiosis is so successful that this lifespan can reach thousands of years. There are not a lot of moving parts to wear out in this simple organism. Lichens are used to measure geological time of various events in Earth’s history such as glacial retreat.

The beauty of lichens is in the vibrant colors that breathe life into the Arctic and northern regions. These colors stand out especially in winter when they poke through snow covered areas ..usually on rocks sloping off to the water or valleys. Also, when you examine these amazing, diverse organisms up-close with a magnifying glass or a spool lens the true wonder of the structures appear. Alien-like colonies provide a bedazzling look into the lichen world appearing as their own microscopic worlds. 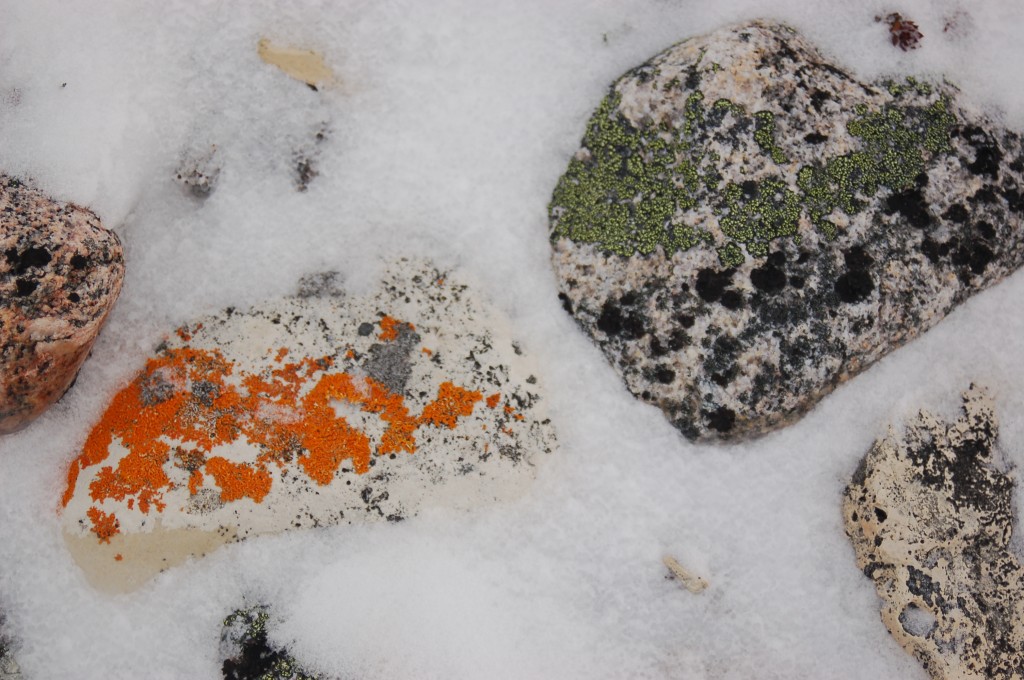 Lichens have the unique ability to shut down their metabolisms for periods of time to survive extreme conditions like cold, heat and drought. This ability to regulate and utilize varying amounts of air, light and moisture, lichens can colonize just about anywhere on Earth. One of Churchill, Manitoba’s most prolific lichen species, Xanthoria elegans, survived for over a year and a half attached to the exterior of the International Space Station orbiting the planet in an extreme cold and oxygen deficient climate. These experiments and survivability of the lichen species in space have giving credence to the idea of ‘panspermia’ or the theory of life spreading from of life spreading between planets and even solar systems.

Trays filled with organisms were installed on the outside of the International Space Station to study the affects of space on their life cycle. European Space Agency photo.

Living organisms surviving in open space supports the idea of ‘panspermia’ — life spreading from one planet to another, or even between solar systems.

The viability of lichens surviving in such harsh conditions and particularly the strong power of the Sun for an extended time of 18 months has sparked major interest in cosmetic companies trying to develop sunscreen products.