The thousands of snow geese that make Churchill home every summer have descended on the frontier northern town once again. This image by Rhonda Reid shows the snow geese lighting on the tundra ready to forage on the marsh grasses of the Hudson Bay coastline. 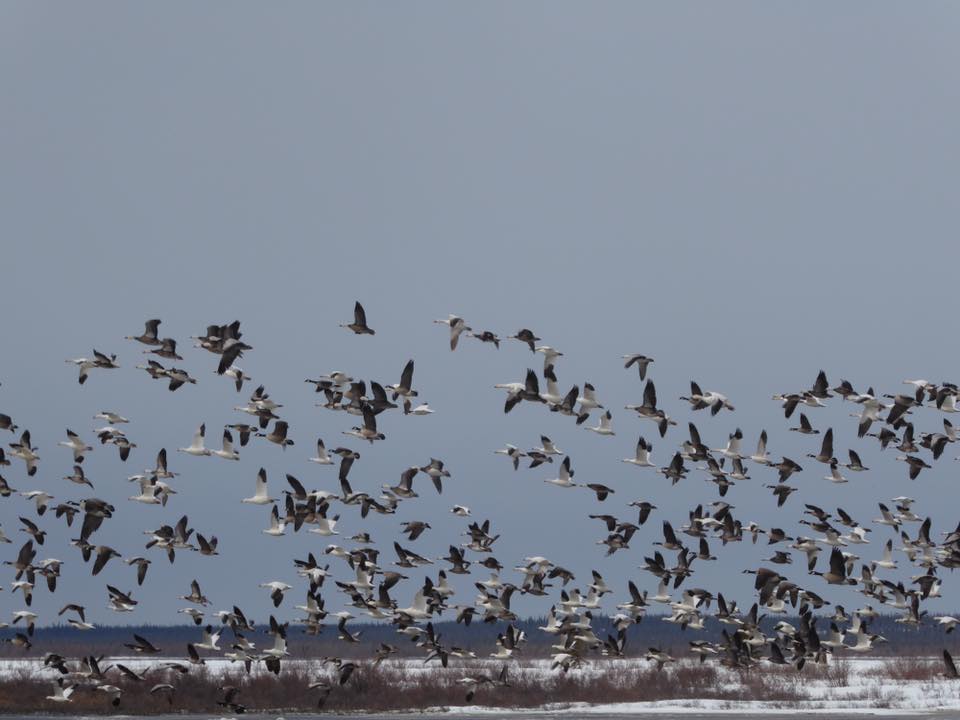 Anyone that has worked in Churchill over the years has heard of Nestor 2 goose camp. And, if you’ve traveled to Churchill to see the incredible wildlife within the last 20 years you have seen and most likely heard the plight of the snow geese population. Snow geese have been prevalent out on the tundra and mostly out east near Cape Churchill at La Perouse Bay for decades.

About 40km down east from Churchill on an island in the Mast River lies a few rustic cabin structures with wire fencing around them known as Nestor 2. The iconic 40 year-old bird research camp also known over the years as Camp Finney, Queens University Tundra Biology Station and the Snow Goose Camp has a storied history that continues to this day.

In 1968 Fred Cooke and Ken Ross journeyed to Churchill with a grant from the Canadian Wildlife Service to study a newly discovered snow goose colony around La Perouse Bay and decided this location would be ideal for long term research of the birds.

An initial cabin dwelling some distance from the study area at Knight’s Hill Esker was abandoned and graduate student George Finney, project supervisor, decided a camp nearer the study site was needed. With tremendous assistance from Dave Yetman and Lindy Lee at the Fort Churchill Rocket Range, two trailers and a prefabricated cabin were dragged along the ice on a track vehicle in May before the break-up occurred.

By the mid 1970’s and 1980’s Nestor 2 had expanded in scope and studies of other sub-Arctic bird species was becoming internationally respected in the science world. Films by CBC, BBC, and Television Francaise focused on the work being done there. The snow geese research was cited internationally as the largest avian population study and garnered many awards.

Focus of the camp has transitioned immensely since those early days of a rare snow goose outpost. With annual geese numbers rising steadily between 5% and 10%, environmental damage began to occur. The salt marsh area known as La Perouse Bay became ravaged by the geese which then had repercussions on other wildlife species in the area. Research soon became more focused on the plight of the destruction zone and how snow geese should be managed. Professor Bob Jefferies from the University of Toronto led this new path in research until he passed away in 2010. Dr. Rocky Rockwell from the American Museum of Natural History, who had taken over for Fred Cooke in 1992,  took over complete leadership at that point. Focus has shifted even more these days with the inclusion of the affects of global climate change on the interaction of species.

Snow geese culls over the last decade or so have done little to reduce the population numbers. However, Churchill numbers around La Perouse Bay are down considerably since vegetation essential to gosling rearing is gone. Wapusk National Park still hosts large snow geese colonies today.

This 1999 photo of Dr. Rocky Rockwell with a vegetation exclosure that protects from feeding snow geese. The problem was in the early stages then. Grand Forks Herald photo.

For more in depth study of the La Perouse Snow Geese research you can read,“The Snow Geese of La Perouse Bay: Natural Selection in the Wild by Rocky Rockwell, Fred Cooke and David B. Lank.