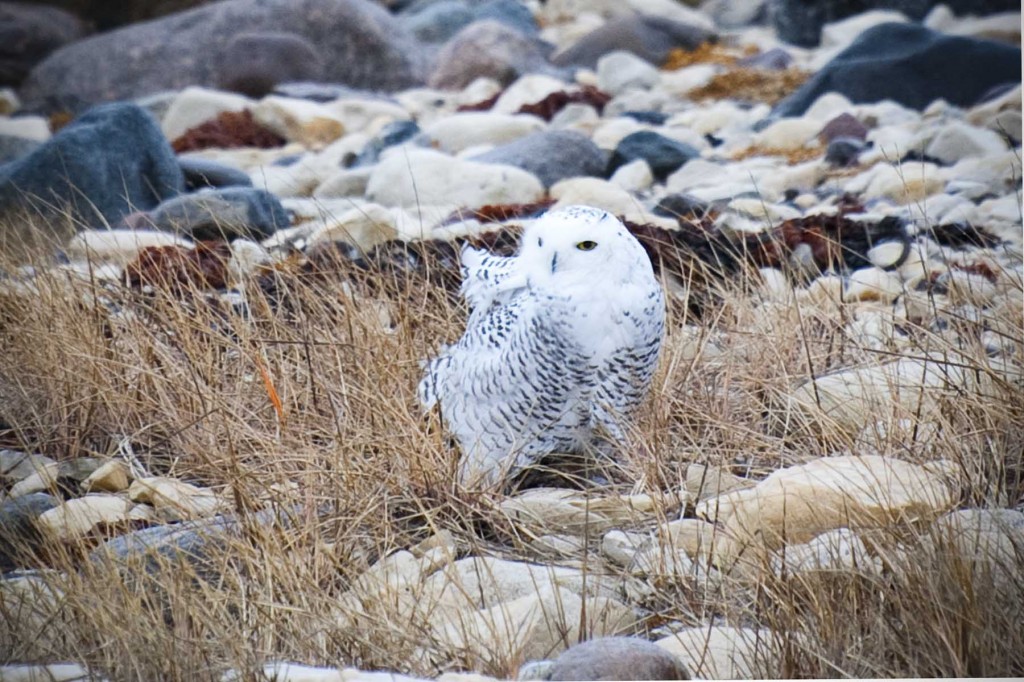 Churchill has no shortage of polar bears at the moment. In fact, the 2014 season has started with a “bang”…literally. Conservation officers and the Polar Bear Alert squad have been busy patrolling the area. With 10-12 bears currently in the polar bear holding facility, formerly known as the polar bear jail, there’s a clear indication that this could be one of the most frenetic seasons in a long time.

Natural Habitat guide Karen Walker has been leading a group of quilters from the states around the Churchill area and they have had great fortune in sightings so far.

“I’ve got a group of quilters on this trip.  Luana Rubin is the organizer of the group.  She came on Justin’s polar bear trip last year and this year she brought a group of quilters up with her. You can check out Luana’s website at eQuilter.com”  reported Karen. The group has been connecting with local quilting groups and enthusiasts in both Winnipeg and Churchill.

After exploring Winnipeg for a day, the travelers enjoyed a mostly clear flight up to Churchill, allowing vivid views of the post-glacial – thermokarst ponds and rivers covering the land along the way.  Crossing over Gillam to the south allowed a view of  the hydro dam. After lunch at gypsy’s in Churchill the group experienced an orientation of the area through a visit to the Parcs Canada visitor center and a look at a polar bear den exhibit followed by some time at the revered Eskimo museum to take in the rich history of the region.

Polar bear in the willows in Churchill. Eric Rock photo.

Heading out to the tundra of the Churchill Wildlife Management Area, along the Launch Road, travelers spotted their first polar bear.  The male bear “was a little ways away, but it was still quite exciting for the group” according to Karen.  After a quiet, relaxing evening on the tundra, enhanced by a wine and cheese offering, the group was afforded a nice view of an arctic hare on the drive back to the launch.

A planned trip out east the following day, took a turn a short way down the trail with the appearance of two bears near the Tundra Lodge, so the polar rover meandered over in that direction. A couple of other groups on rovers were in the area so one polar bear seemed a bit skittish with the crowd. As the first two rovers headed to the lodge, Karen’s rover settled in and remained near the pond and observed the adult female. Slowly becoming more comfortable, her curiosity peaked and she approached the rover. Pausing at around 30 feet of the back deck, she watched tentatively for a long while,  grooming herself and then napping while the group took in the scene for over an hour. The rover then proceeded over by and just past the lodge and they settled in to watch a couple of “teenage” sub adult bears spar a bit. After exhausting their energy, they settled into the willows for a rest. “We were a little ways from them, but it was still amazing to see” Karen reported.

On the other side of the lodge was an adult male that was napping in the open. This bear made stilted moves at rising but only lifted his head and then returned to resting. After a couple of travelers and Karen headed across Christmas Lake Esker and up to Halfway Point.  Coveys of ptarmigan along the way, mostly already suited in their winter camouflage white, scurried ahead of the rover winding between willow stands.

“The weather and soft lighting was beautiful today.  We had snow showers several times and some sunny breaks, and everything in between.  It changed about every twenty minutes or so. Quite the majestic day on the tundra…tomorrow we’re back on the tundra.  We’ll try to get out east this time” stated Karen, fulfilled from an amazing day.

The following day out in the Churchill Wildlife Management Area Karen and travelers were greeted by a large male bear walking right by their rover as they headed out east. Several polar bear sightings later they were at the coast and two adolescent males were sleeping along the kelp beds. One awoke, picked a fight with the other, and the two bears sparred for a good time just 50 feet from the rover. They then returned to their slumber and sparred again later just inside the willow stands a bit farther out. At lunch another male joined the trio and spareed intermittently just off the back observation deck. A “three bear lunch”, as described by karen. The “best and closest sparring I have ever seen”, added Karen.
Two separate excellent viewings of ptarmigan along the trail as well as a lone snow bunting in the willows rounded out the excursion. A fantastic tundra experience in the CWMA!
Next Entries »