Beluga’s resting in the mouth

Natural Habitat guide Sue Zajac and her first group of the summer arrived by train just a -half hour late…very impressive for the summer Hudson Bay Railway train…to a more moderate Churchill..temperature -wise that is. With hot weather pervasive the past couple of weeks, the nearly on-time train arrival is even more impressive. The heat has a negative affect on the tracks, especially the further north they run, by melting the top layer of the permafrost and allowing the steel tracks to bend slightly. This affect forces the authorities to impose “slow orders” for locomotives to evade possible derailments. Most derailments happen to grain trains due to the extra weight of the cargo. The photo below illustrates an unusual breakdown of a mound most likely covered in permafrost.

Derailment due to permafrost melt. The CANADIAN PRESS/HO-Saskatchewan RCMP

With an efficient start to the adventure up north, Sue gathered the group and headed out to Cape Merry for beluga reconnaissance. With 63F and overcast skies across the vast Hudson Bay, travelers spent over an hour at the cape..a fairly mosquito – free cape at that.

While searching eyes scanned the bay and river, whales appeared at first to be quite scarce until at last out in the direction of Fort Prince of Wales across the river, some smaller groups of 10 or more among hundreds in total, seemed to be resting on the surface and remaining afloat for five minutes at a time. Even some sows and two-week old calves were scattered throughout the larger pod. The mouth of the Churchill River also has swift currents coupled with turbulent water…another possible attraction for the weary leviathans. It will be interesting to follow subsequent beluga behavior this summer. ..a new pattern each season! A “glorious day at Cape merry”!, according to Sue.

On the birding front, the greatest excitement of the trip thus far came from an excursion out to the granery ponds on the backside of the port on the edge of town. A multitude of nesting herring gulls, yellow legs, and Arctic terns greeted the group as they observed with binoculars and cameras. A green winged teal with chicks in- line crossed the road leading out to the boat docks just as the terns began their calculated assault on travelers that were, in their opinion, much too close to cherished nests. Dive bombing terns attacked the group fending themselves off with a long stick. I personally have witnessed the “wrath of the tern”, and although no imminent danger presents itself, an occasional beak to the head can draw blood… A fair warning to keep your distance.

The premature and extended heat this spring has stalled the prolific bloom of wildflowers across the tundra. Many early flowers like the avens have already gone to seed. Hopefully the rest of the summer, with a little cool weather, will provide some late bloomers.

Summer pics of the Churchill River

Local guide and photographer Rhonda Reid caught some of the action on the Churchill River recently. These are fresh from the cold water ( 42 F roughly in the mouth area of the river) up north …a preview of more to come.

Summer in Churchill attracts all kinds of marine and avian life to the Hudson Bay and Churchill River…an incredible bounty of life swirling in the air and water. Here’s some amazing photo’s to get everyone excited about traveling up to Churchill this Summer! Natural Habitat’s Arctic Summer journeys begin soon. Stay posted to follow their sightings and discoveries.Enjoy!

Natural Habitat guide Sue Zajac will be heading to Churchill next monday with the first Arctic Summer group of the season. Cool weather and clear skies are predicted for the week and the landscape should already be washed in some wildflower colors. The short growing season provides for a frenetic blast of summertime changing palettes. This backdrop coupled with the varied wildlife surprises constantly revealing themselves makes for incredible experiences every day of the trip. Can’t wait to see what unfolds these next two months!

When many people think of the tundra, they think of rock and barren landscape, with very little life. In fact, even the name – tundra- comes from a Finnish word meaning “treeless.” Though the summer season is short with really only two -three months of growing season…there are roughly 1,700 types of plants that grow in Canada’s Arctic. Of these, there are over 800 flowering varieties.

Because the permafrost prevents any deep-rooted plants from growing, the plants that do live here must be extremely adaptable to the harsh conditions. Flora such as mosses, grasses, heath, lichens and small shrubs abound. In the summer, the icy blanket melts away and quickly the ground is awash in red, pink, purple, green, yellow, and blue. The contrast from the stark white of winter is quick and dramatic. 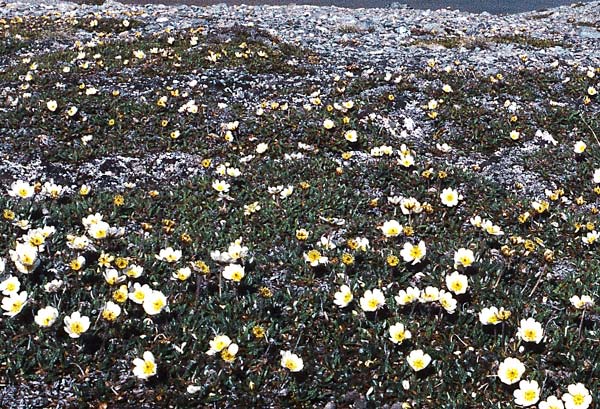 However, the first large swath of color to cover the rocky areas of the tundra’s Spring surface is ..well..white. Mountain avens or Arctic avens ,as they are called, often emerge through the exposed land and signal the beginning of this short but bountiful Summer season. An avalanche of wildflowers follow throughout the season with precise timing so to maximize the pollination options from various insects. Every living organism in the north is opportunistic…aside from some humans I imagine. These wildflowers adapt to any obstacles the tundra provides…and they do it amazingly. Avens twist into a seed ball at the end of their flowering faze and even grow higher to launch their seeds in the wind..really a fantastic adaptation to the region. 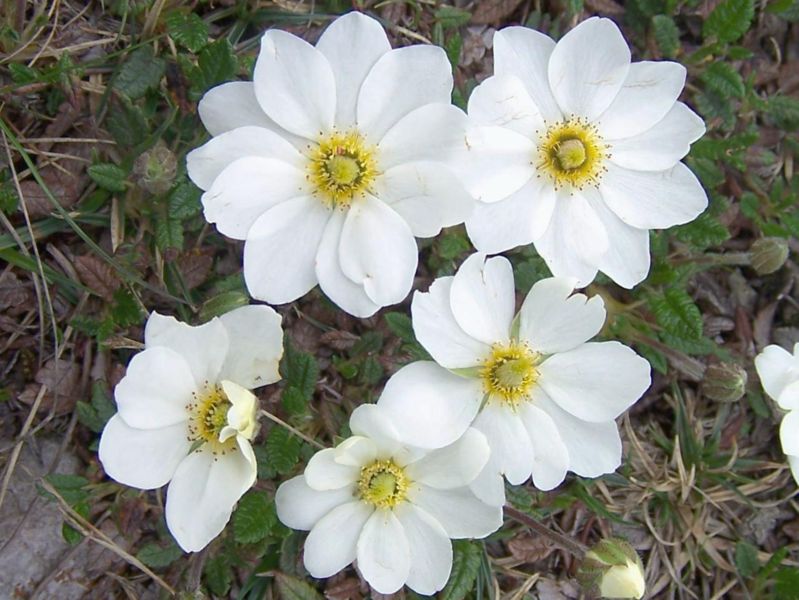 So when you make it to Churchill some Summer be sure the belugas aren’t the only wonder you take in…enjoy the wildflowers ..starting of course with the magical avens.